Learn More About The ShamRogues

The ShamRogues have been entertaining crowds all over the

East Coast since 2009 with their unique brand of Irish music

and dance. From Washington D.C. to Maryland, New Jersey,

Pennsylvania, Delaware and the famous Irish venues of New

York City, the band has attracted fans of all ages and walks of

life wherever they travel with their show. Having performed a series of sell out shows in Ireland over the past several years, the band has blasted onto the International scene in a blaze of electric fiddles and banjos.

Not a band to stand around on stage blasting out song after song, The ShamRogues like to involve their audience in a fun, lively evening of songs and stories of Ireland, and God help anyone who forgets to clap along !!!

Since 2009, The ShamRogues regular circuit includes Maryland, Virginia, Pennsylvania, New Jersey and New York City. They tour Ireland annually in July/August and have been featured regularly at the Maryland Irish Festival, the Annapolis Irish Festival, the Wildwood Irish weekend in NJ and the Celtic Craic Irish Festival in PA. 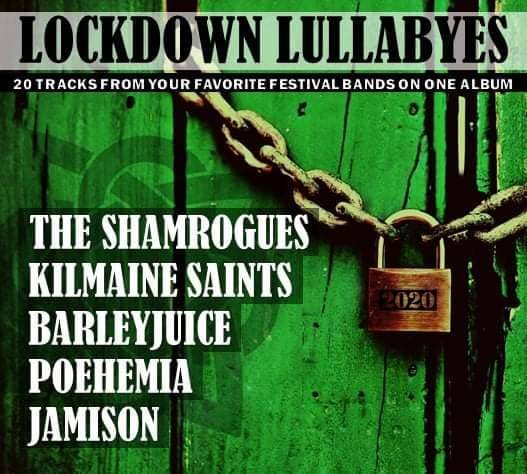 Lockdown Lullabyes - a collaboration of your favorite Irish Festival bands on one album. 20 songs including many of your favorite classics, several new recordings and a few unheard originals!

The collection kicks off with The ShamRogues' brand new original tune CÉAD MÍLE FÁILTE and finishes up with Poehemia's PARTING GLASS! In between you will enjoy a mix of some great Irish classics along with several more originals by your favorite Irish Festival bands!

The ShamRogues on Social Media & Streaming